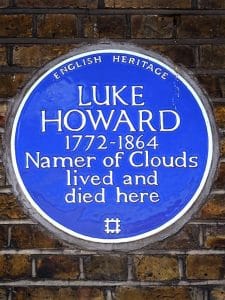 Little fluffy ones? Massive mushrooms? A mackerel sky? There’s fun to be had describing clouds, but we’ve got Luke Howard to thank for a naming system that the world understands

A derelict building in Tottenham bears the English Heritage blue plaque for Luke Howard, the ‘namer of clouds’.

Cumulus, stratus, and cirrus were categories devised by him, as part of an elegant naming system that he created in 1803. Cumulonimbus –  cumulus – heap, nimbus – rainy cloud – is my favourite; a mighty anvil threatening rain that simply rolls off the tongue.

A professional chemist and an amateur meteorologist, Howard applied the Linnean system of classifying plants and animals to the ephemeral world of clouds, using Latin to ensure it was understood everywhere.

Inspired the arts and the sciences

He was a weather pioneer, and inspired the arts as well as the sciences. German poet Johann Wolfgang von Goethe dedicated four cloud poems to him, and Constable and Shelley were among his fans. More recently, he had a starring role in Stéphane Audeguy’s award-winning novel The Theory of Clouds.

Howard lived at 7, Bruce Grove, Tottenham, from 1852 until his death in 1864, aged 91. There is a campaign to save the crumbling Georgian townhouse, which is Grade II listed and classed as ‘at risk’.

His consistent naming system gave cloud lovers – and there are many – a language with which to share their passion. I think his old home, and Tottenham at large, deserves a lot more respect.

‘But Howard gives us with his clear mind
The gain of lessons new to all mankind;
That which no hand can reach, no hand can clasp
He first has gained, first held with mental grasp.’
Goethe

Tottenham Clouds: celebrating the achievements of Luke Howard, a resident of Tottenham

Find out how I can make words work for you